This article is reprinted with permission from SFForest.net

The deadline for comments on the Draft Environmental Impact Statement (EIS) for the East Bay Tree-felling plan is TODAY. From the FEMA website:

Submitting Comments on the Draft EIS

If you’re considering submitting a comment, please do so now. The Draft EIS is available HERE; it’s a long document. The Executive Summary is quite short – and telling. It’s here as a 16-page PDF: Executive+Summary-East Bay

Please ask FEMA not to fund a futile Native Plant restoration project that will only increase the fire hazard by:

It will also use thousands of gallons of toxic pesticides on steep hillsides where they can get into the watershed. It will release carbon emissions on a huge scale. This project is not only environmentally destructive, it is a huge waste of funds that should be used to actually reduce hazards, not increase them.

Ask them to approve the No Project alternative.

Read on for more details. 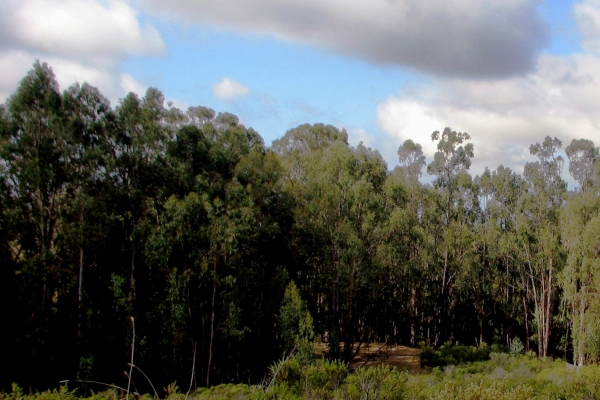 The East Bay Hills projects include three related projects by UC Berkeley, the City of Oakland, and the East Bay Regional Park District (EBRPD). They all seek money from FEMA to cut down trees as a “fire hazard.”

The first two projects (UC Berkeley/ Oakland Hills) will essentially clear-cut all the non-native trees in the projects areas: eucalyptus, Monterey Pine (yes, it’s “non-native”!) and acacia. This would be around 77,000 trees. They will chip the smaller trees and branches, leaving a mulch up to 2 feet deep on the ground. The larger branches and logs will be left unchipped. Pesticides – Roundup, Garlon, and Imazapyr – will be used to prevent re-sprouting and to kill non-native shrubs. They hope that native plants and trees will move into the treated areas, creating an oak-bay woodland.

The third project (EBRPD) is slightly different, in that it proposes to “thin” the forest and cut down some 409,000 trees but leave around 60 trees per acre standing. It proposes chip the felled trees, spread the wood chips as mulch to a depth of 4-6 inches and burn the rest. It also plans to use prescribed burns to control the understory.

You can read about this plan and the tree removal calculations HERE.

Even though this has been positioned as a fire hazard reduction project, it is clearly targeted at native plant restoration – using Federal Emergency Management funds. All the management actions are likely to increase fire hazard. Those pushing this plan have emphasized the flammability of eucalyptus (which isn’t actually more flammable than most trees) but avoided the more important comparison: Will the landscape that will replace a felled eucalyptus forest be even more flammable?

There’s a good article about this in the East Bay Express, HERE

The worst of it is that it is essentially irreversible. If the planners realize that most of what the opponents say is true, they cannot grow back trees that took decades to become what they are now. They cannot sequester the carbon they’ve released. They cannot cure the people whose health has been adversely affected by pesticides. All they can do is declare victory and move on.

Is there a potential win for anyone? Well, maybe. It will empower the people who will be giving out the contracts, and benefit the contractors who actually do the work and the pesticides suppliers.

And UC Berkeley’s Long Range Development Plan calls for building 100,000 square feet of additional space in the hills. It would undoubtedly be convenient to have the tree removal funded by FEMA.

PROBLEMS WITH THE PROJECT AND THE DRAFT ENVIRONMENTAL IMPACT STATEMENT

WHAT ELSE YOU CAN DO

If you have not yet done so, sign the Hills Conservation Network petition. It has over 5500 signatures already.

Contribute. Hills Conservation Network are also raising funds for potential legal action. If you would like to contribute, their website is HERE and includes a Paypal button.