San Francisco’s Natural Areas: 2012 A Record Year for Pesticide Use 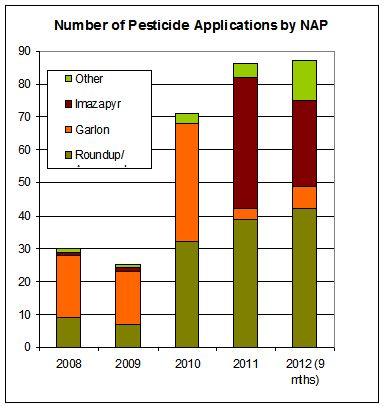 If, like us, you hoped that 2012 might be the year that San Francisco’s Natural Areas Program (NAP) proved us wrong about its escalating  pesticide use — it’s not happening. That ship sailed in September.

Readers of this site will know we’ve been following pesticide use in Natural Areas; we think it’s a distressing preview of what could happen if UCSF implements its Plan for the Sutro Cloud Forest, and revokes its current no pesticide policy. (Thanks, UCSF for keeping Mt Sutro pesticide-free thus far.) 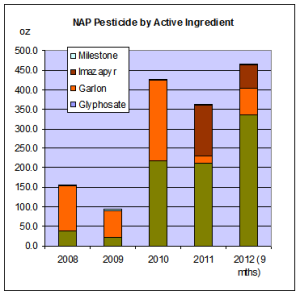 So we obtained the pesticide reports every few months, and compiled them.  In September 2012, the Natural Areas Program’s nine-month pesticide use surpassed 2011’s full year usage by every measure.

[If you’re looking for an explanation of these measures, it’s HERE.]

It’s a record year for NAP’s pesticide use. We repeat: In nine months, it’s already surpassed its record in the previous five years. 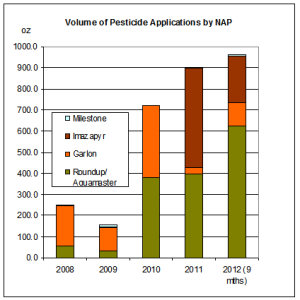 People have asked where we get our data. We get it from the City, by filing requests for the information. (The data for our calculations of Active Ingredient and Acid Equivalent we get from Material Safety Data Sheets and related technical sources. )

Our analyses are as accurate as we can make them.

2 Responses to San Francisco’s Natural Areas: 2012 A Record Year for Pesticide Use