We’ve been talking about the beauty of this forest, especially on a foggy day – and it occurred to us that hikers less familiar with it might want better information. This article has been reprinted from Mount Sutro Forest.

[Edited to Add: We also suggest looking through recent our posts (listed on the right side of the Home Page)for reports on trail hikes. We try to report on hiking conditions from time to time.]

Hiking in Mount Sutro Forest is a different experience than almost anywhere else in San Francisco. It’s heavily shaded under the tall trees. Looking up at the trees, some of which are 100-200 feet high, really gives a sense of being in an old, wonderful place. On a foggy day, it may be the most beautiful place in all the city. The mist wraps the tops of the trees towering overhead while you walk through the trails of a fresh wet forest in its self-contained rain. On weekdays, there are usually few people around, so there’s a sense of splendid isolation amid towering misty trees. 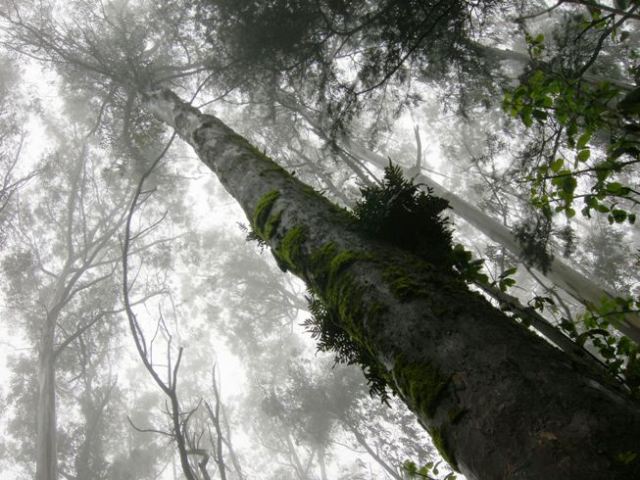 Though we love best the days when it’s a mysterious cloud forest, sunny days are also delightful in the woods.

Mount Sutro is on the western side of San Francisco (see the front page of this website for the location). It’s north of Clarendon Avenue, South of Parnassus Avenue. It’s accessible by public transport, though it’s a bit of a walk in from the nearest bus-stops.

Edited to add this May 2014 information about the bus. It’s from Tony Holiday, who should know:

For locals who take MUNI, the #43 goes up Parnassus and stops:

All from one bus!

There’s no parking area for the forest; all the parking lots in and around it are for UCSF employees or students. So it’s street parking. Here are the options:

1. Stanyan and 17th. The trailhead starts with a wooden staircase about two houses above the intersection. The area has 2-hour street parking.

2. Clarendon Avenue. This will give access through the Aldea campus to the Fairy Gates Trail or the East Ridge Trail.  There’s also a new trail starting at the top of Behr Avenue, on your left just before the chain blocking the Nike Road.  (If you park on Clarendon Avenue, be careful to conceal belongings; a number of cars have been broken into.)

3. Christopher or Crestmont. You can usually find unlimited street parking in the neighborhood; the unmarked trailheads start opposite and 365 Crestmont. These are steep. [Edited to add March 2017: The unmarked trail head opposite 101 Christopher Drive has been closed. There’s a new trail that starts next to the pumphouse at Christopher and Forest Knolls Drive; it’s longer and more gradual. We will update the map soon.]

4. Edgewood. There’s usually neighborhood street parking somewhere there, and you can access the trailhead at the end of the road.

5. Belgrave. Neighborhood street parking with limited hours. This trail is quite dense; it brings you to the Aldea campus where you can take various other trails.

A number of trails go into the woods, from various points around the mountain. Carry a trail map with you, at present there are no maps at the site, though trail markers have recently been added (2010).

[Edited to Add (July 2, 2011): The map below is based on one from OpenStreetMap.org, with some added trails, boundaries and labels. If you click on it, then click again, it opens up to a larger version that can be printed. ETA Jan 2012: Updated to add a new trail and also add the original name of the Fairy Gates trail, “Topo Trail.” . ETA March 2017:  The unmarked trail head opposite 101 Christopher Drive has been closed. There’s a new trail that starts next to the pumphouse at Christopher and Forest Knolls Drive; it’s longer and more gradual. We will update the map soon.]

The Google map’s embedded here to give a sense of the steepness of the slopes:

If you are looking for the ethereal cloud-forest experience, pick a foggy day in summer, and go for trails such as the South Ridge Trail, and the top part of the Historic Trail. As a general rule, look for areas where the undergrowth remains dense and the tree canopy exists. Narrower trails () are more atmospheric.

The lower part of the Historic trail is quite dry especially around the area where it changes direction from North to West (going downhill). The Fairy Gates Trail, which runs below Medical Center Way past the Chancellor’s house, is one of the driest – it is often dusty even in foggy weather.

From the Clarendon Avenue side, trails start within the Forest Knolls neighborhood (street parking) and UCSF’s Aldea Student Housing (no outsider parking).

From Forest Knolls, two trails offer a steep climb up to a cloud-forest environment.

On the downhill side:

If you’re starting at Parnassus, you can also climb the steps from the bottom of Medical Center Way to the Surge Parking lot.

CAVEATS AND BEING PREPARED

Waterproof shoes. It’s almost always damp in there, even on a sunny day. This is a Cloud Forest, and it lies in the Fog Belt. Even if it’s sunny downtown, or outside the city, it may be misty in the forest. Or it may have been cloudy overnight, with the forest’s internal rain falling through the night.

(Update mid-Jan 2014: With our very dry winter this year, there’s no mud. Most of the trails are very dry and may be slippery due to gravel and dust – especially for bicycle riders. A few areas are damp, which is ideal.)

(Update 2010: Some trails are now so wide with undergrowth removal that they can be dry, even dusty. In this condition, on sunny days they become slippery from dust, dry leaves, and gravel, particularly on slopes.)

Long pants and long-sleeved clothes. It’s seldom warm enough to be comfortable in short-sleeved clothing. It also helps against poison oak. On foggy days, dress warm and wear rain-gear. Even if it’s dry outside, it will be raining in some areas of the forest.

Allow for mud. If it’s a foggy day, clothes can get muddy. Especially if you kneel down to get photos like the one above.

Stay on the trails. This protects both the forest, and the hiker. Poison oak is an issue. Though not as rampant as in more sunny areas, it is also more difficult to spot amid the greenery.

Careful on wild trails. In addition to the named trails shown on the map above, there are a few “wild” trails that are maintained little, if at all, and may dead-end into impassible greenery. They aren’t suitable for bike riders, but for someone interested in a wilder experience, these may be interesting to explore. Caution: some of them will have poison oak.

Careful on very stormy days. Many times, when it’s windy on the bare hills like Twin Peaks, there’s not much of a wind in the forest; the trees block it. But if it’s stormy, there could be falling branches – especially in more open areas of the forest and along the edges.

Some trails are also accessible to mountain-bikes. (Motorized bikes are not allowed in the forest.) Volunteers at SF Urban Riders help to maintain the trails. The best trails for riding are the Historic Trail and the Fairy Gates trails, others may be too muddy for comfort in foggy weather. (There’s an article here about accessing the Forest from the Forest Knolls neighborhood.)

The trails are suitable for older kids, not so much for very little ones who may want to be carried. Some trails – especially Fairy Gates – have steep edges and drops. There’s no stroller or wheelchair access except the paved Nike Road up to the Native Garden (the garden itself has gravel paths, not paved ones).

Dogs are allowed, though they’re supposed to be leashed. (A plea to dog-people: Please don’t leave plastic baggies of droppings in the forest, they don’t biodegrade even if they’re meant to. They uglify it for everyone else.)

[Edited to Add: What happened to the map that used to be here?  Though we believe it to be non-copyright, we took it down because of a letter from the lawyers for Sutro Stewards.]

14 Responses to Hiking in Mount Sutro Forest – Pointers and Map