Garlon in Our Watershed

Garlon is one of the two pesticides that UCSF proposed to use to prevent re-sprouting of felled eucalyptus, blackberry and vines. It is regularly used on Twin Peaks, one of the highest points in the city.

We should mention that on Mount Sutro, UCSF is currently using  no herbicides at all. Neither is the Marin Municipal Water District, and it’s easy to understand why. Someone sent me the chapter on Garlon from the Marin Municipal Water District (MMWD) draft Vegetation Management Plan. (You can read that here:Chap4_Triclopyr_8_27_08 ) It was a pretty thorough multi-source review of what was known about the chemical, and it clarified the risks: birth defects; kidney damage; liver damage; damage to the blood. 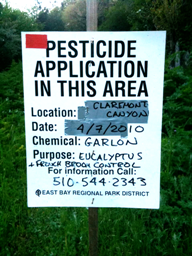 Garlon, the herbicide called triclopyr, kills broad-leaved plants (not grasses or conifers) by sending them a hormonal signal to grow uncontrollably. This weakens the plant until it dies. Its breakdown products are triclopyr acid and then ‘TCP’ – both of which are, fortunately, somewhat less toxic than Garlon. (Imazapyr,  by contrast, breaks down into a neurotoxin.)

THE DANGERS OF GARLON

What stood out, though, was how much is not known, particularly about the effects of repeated low-level exposure. There simply isn’t that much research out there, and few human studies. “Although triclopyr has been registered in the US since 1979, there are still very few studies on triclopyr that are not part of the EPA registration process.” Most of the research that exists is on Garlon 4. What is used on Twin Peaks is Garlon 4 Ultra. It’s similar but isn’t mixed in kerosine. It’s mixed in a less flammable but apparently equally toxic methylated seed oil.

What is known makes uncomfortable reading.

Given all the information we do have on this chemical (and all the information we don’t have ) we have to question why native plant restoration is worth spraying poisons on some of the highest points in our city. Garlon must be used when the weather is wet; if the plants don’t have water, they will not grow and the chemical won’t work. But the runoff from these hills is enormous during the rain – it washes down in rivulets and streams, and it will end in the reservoirs, the groundwater, and the bay. Garlon notices were up on Twin Peaks for most of March 2010.

We also question whether it even achieves the the nativists’ objective. On Twin Peaks, it’s targeted at oxalis, but Garlon is not a precision instrument. It will kill all broadleafed plants, native or otherwise, and favor grasses. Over time, Garlon use will convert Twin Peaks to non-native grasses (because those grow faster than native ones).

Meanwhile, the soil chemistry is probably being altered, and a regular dose of toxins added to our watershed in our “Native areas.” We have no idea whether there’s a particular risk to dogs being walked in Garlon-sprayed areas, or to pregnant women there or in the homes below the Garlon-sprayed hills. Based on the current levels of research and information, we’d guess that San Francisco’s Recs and Parks has no idea either.

22 Responses to Garlon in Our Watershed